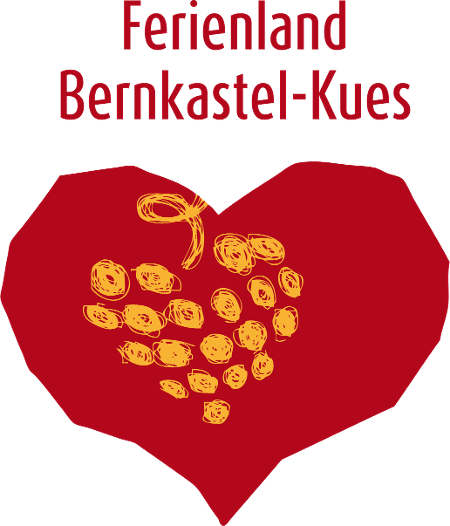 Bernkastel-Kues is the home town of the famous late medieval philosopher Nikolaus von Kues, called Cusanus.
Insights into the city walk:
The Cusanus Walking Trail leads past the places where Cusanus worked, such as the St. Nicholas Hospital, a nursing home for the elderly founded by him in 1458, where elderly people can spend their old age without worries on the basis of his charitable foundation. The library that Cusanus left to St. Nicholas Hospital is also famous. In the house where he was born, a permanent exhibition provides information about his life and work. Cusanus was the son of the wealthy merchant and ship owner Johann Cryfftz (=cancer). At the house where he was born, a stone plaque with a crab coat of arms and an inscription commemorates the venerable Nicolaus Cusanus, who was also cardinal and bishop of Brixen (which is why the Cusanus hiking trail is marked with a crab on the pavement).

Tuesdays and Fridays there are guided tours of the St. Nicholas Hospital: very worthwhile!

The Cusanus hiking trail begins at the Moselle Guest Centre. You cross the Moselle bridge and descend the steps at the former Hotel Drei Könige. Afterwards you will walk across the Moselle meadows, the parking lots in the Kueser district and past the miniature golf course to the Cusanus House. The "Cusanus game" can be rented at the miniature golf course and at the Cusanus birth house. The so-called globe game requires some skill and has an interesting history.
Cusanus was born in this stately house in 1401 as the son of the merchant and ship owner Johann Cryfftz (=cancer) and his wife Katharina. He grew up here together with his brother Johann and his two sisters. After studies in Heidelberg and Padua he started his professional career as a church lawyer. At the same time he studied theology in Cologne for a few semesters. A steep career led him to the rank of prince-bishop and cardinal. Later, Nicholas and his siblings bequeathed the house to St. Nicholas Hospital. Under its rector it was rebuilt in 1570 and was given the stone tablet with the crest of cancer which can be seen today. Today the museum houses a permanent exhibition on the life and work of Cusanus.
The path continues along Kardinalstraße, which becomes Pützstraße and at its end leads into Weingartenstraße.
Following Weingartenstraße to the right, you will pass through a piece of "Alt Kues". In this narrow street the typical Moselle countryside still lives on: traditional wineries and beautiful half-timbered houses. You pass the St. Brixius church. This church is mentioned for the first time in 1258 and was called Halbmutterkirche. It was here that Nicholas of Kues and his brothers and sisters were baptised. Since 1447 it is known that St. Briktius is the patron saint of this parish church. Already the first Kueser church stood at this place. However, it was smaller in the length of the nave and in the height of the tower.
At the end of this of Weingartenstraße turn left towards the cemetery and follow the ascending St. Brixiusweg. Now you will reach the Cusanus Hospital (Cusanus possessed an astonishing number of medical writings, more than the University of Paris in its time). Behind the hospital, the walk follows the Karl-Binz-Weg downhill. At the crossroads, slightly to the right, walk along Brüningstraße and take the third street to the left into Mozartstraße. After approx. 150 meters you will see the former post office building on the right hand side, with special art on the building.
After you have left the post office behind you, walk along Mozartstraße, which leads to the "Forum Alter Bahnhof". On the right hand side you will see the "Steillagenzentrum Mittelmosel", which has recently combined research, education and science on Moselle viticulture in one building. At the bus stop on the Forumsplatz you walk left through the modern arcades to a few steps, then you cross the zebra crossing of the Cusanusstraße.
On the opposite side of the street you can already see the Wine Cultural Centre with its multimedia wine experience world and vinotheque. In the inner courtyard of this complex you will also find the St. Nikolaus Hospital. The hospital was built between 1451 and 1458 in late Gothic style and was built from the considerable fortune that Cusanus and his sister had inherited from their father. The remaining inheritance and many estates became the basis for a foundation. According to Cusanus' will, thirty-three poor, worn-out men over fifty were to live here carefree for the rest of their lives. For more than half a century, the hospital has continuously fulfilled this function as a home for the elderly (now also women).
After an extensive apprenticeship about Moselle viticulture in the wine museum and a short rest, we continue to follow the road towards the Moselle bridge. On half of the bridge, the "Bernkasteler Sonnenuhr" (Bernkastel sundial) stands on a small balcony. From this location you have a magnificent view of the Bernkastel district with the parish church of St. Michael, Landshut Castle and the Moselle navigation. From 1450 to 1456, Nikolaus's brother Johann was a pastor in the church of St. Michael, who was also buried in the choir of this church. However, the tomb no longer exists.
The short way over the bridge leads back to the starting point.

Parking is available on the large Moselle parking lot on the Bernkasteler and Kueser side, directly on the Moselle. During the winter months parking here is free of charge, from April 1st to December 31st.

WanderGuide - the hiking guide in the Bernkastel-Kues holiday region. With description and map. Only available in german

WanderGuide - the hiking guide in the Bernkastel-Kues holiday region. With description and map. Only available in german

Would you like to the ask the author a question?

Help others by being the first to add a review.